A comprehensive school built with the insurance support of Eximgarant of Belarus has been opened in the Voronezh Region, Russian Federaion 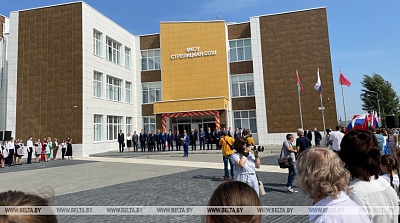 The 520-seat school in the village of Strelitsa, Semiluk district, was opened by the Ambassador of the Republic of Belarus to the Russian Federation Vladimir Semashko on August 31, 2021 during a working visit to the region.

During the visit of the Belarusian delegation to the region, Alexander Timoshishin, Deputy General Director of Eximgarant of Belarus, took part in negotiations with the Governor of the Voronezh Region, Alexander Gusev.

Facility construction issues with financial and insurance support of Eximgarant of Belarus under Decree № 534 were discussed.