Eximgarant of Belarus has introduced a product allowing to avoid the impact of political and economic factors which can result in improper execution of the contract — Pre-Export Risk Cover.

The insurance covers the domestic exporter’s losses due to the impossibility to fully or partially implement the export contract at the pre-export stage of foreign trade cooperation.

Thus in case the overseas contractor refuses to execute the export contract which has been concluded, Eximgarant of Belarus pays out an insurance compensation covering costs incurred by your enterprise to carry out its obligations under this export contract.

Demonstrating a comprehensive approach to the insurance cover of your foreign trade activities, we recommend to combine this insurance product with export contracts insurance and (or) the insurance against the risk of non-repayment of export credit granted to a domestic exporter or to an overseas buyer.

The procedure of interaction: 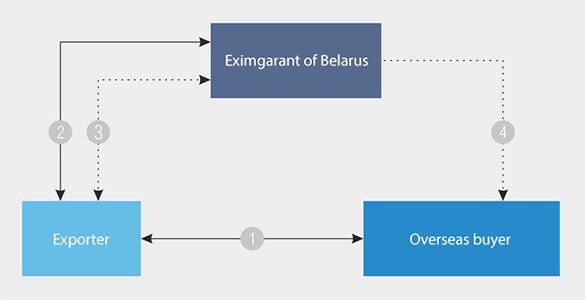 In case the overseas buyer refuses to carry out his obligations under the export contract:

The list of documents required for the conclusion of an insurance contract: