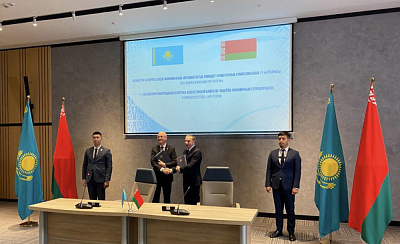 The meeting was held on June 7-10, 2022 within the framework of the visit of the First Deputy Prime Minister of the Republic of Belarus Nikolai Snopkov to the Republic of Kazakhstan.

The Belarus-Kazakhstan Council was held within the framework of the commission, in which the head of the International Cooperation Division, Ilya Sakhar, and the Head of the Export Credit Insurance Division, Yulia Stezhka, took part from Eximgarant.

The Council was attended by representatives of state departments of Belarus and Kazakhstan, business circles and experts in the field of finance and economics. Issues of cooperation and development of trade turnover between the countries in a number of areas, including insurance and financial support for export-import operations, were discussed.

Eximgarant of Belarus held a number of meetings with counterparties from Kazakhstan and discussed the current situation regarding insured projects, as well as the prospects for bilateral relations.

Also, within the framework of the visit, a working meeting of Eximgarant of Belarus and ECA of Kazakhstan “KazakhExport» was held, where issues of joint cooperation with the export support system of our countries in the EAEU market and in insurance and financing of transactions to third countries were discussed, taking into account the current market conditions and the redistribution of the geography of insurance coverage.

The ECAs of Belarus and Kazakhstan discussed further cooperation in the framework of reinsurance of bilateral transactions between the countries.