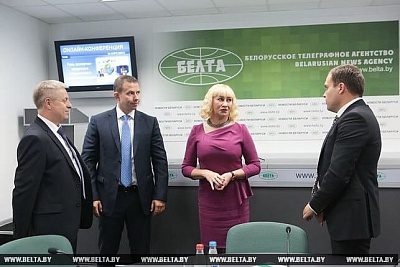 With the view to support enterprises while entering a new market or increasing sales in a tapped one, governments usually implement mechanisms of export promotion, which include export credit insurance and financing. What are the main tendencies in this field and why do ECAs play a significant role in the whole process? Both these questions were discussed by the participants of the international conference “Role of ECA in Belarus Economy” that was organised by Eximgarant of Belarus.

The event took place on the 7th October 2016 in Minsk and brought together more than 120 participants from the leading ministries and concerns, major national enterprises, private banks and foreign ECAs — members of the Berne Union.

The discussion set up during the conference was followed at the BELTA press-centre. The talks were conducted between the Director General of Eximgarant of Belarus Gennady Mitskevich, the Chief Executive Officer of EXIAR Alexey Tyupanov, the Member of the Board of the National Bank of the Republic of Belarus Elena Mashnina, the Head of EXIAR Representative Office in Belarus Viktor Doronkevich and the Director for International Business Development of EXIAR Representative Office in Belarus Andrey Dovnarovich.

The main topic under debate during the roundtable involved the issue of the national export support system and the role of ECA in the economic growth of both countries. Being an institutional superstructure, ECA pretends to be a key element in promoting exports as for its highly differentiated insurance product portfolio. Enterprises which apply for export credit insurance services feel themselves quite secure when operating in foreign markets.

To learn more about the roundtable discussion, please follow the link.