Role of ECA in Belarus economy was discussed in Minsk

On the 7th October 2016 the International Conference “Role of ECA in Belarus Economy”, organised by Eximgarant of Belarus, took place in Minsk. 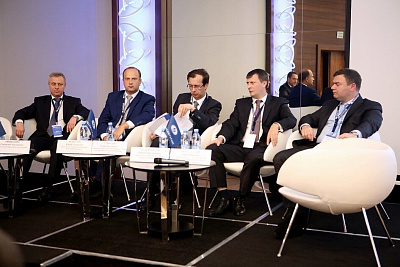 The initiative to conduct the Conference was not only aligned with the 15th anniversary of Eximgarant of Belarus as an official ECA, but also devoted to the national system of export support, as in the year 2016 turned 10 years since its legal establishment by the Decree of the President of the Republic of Belarus dd. 26.08.2006 № 534 “On promotion of exports of goods (works, services)” and a set of regulatory documents issued by the Government and the National Bank. The event gathered more than 120 attendees — representatives of the leading ministries and concerns, major republican enterprises, private banks and foreign ECAs — participants of the Berne Union.

While opening the Conference the Director General of Eximgarant of Belarus Gennady Mitskevich stated the objectives of the event: to discuss current macroeconomic conditions in Belarus, to define key finance and insurance trends, to exchange experience with foreign colleagues, to estimate the impact of ECA on the increase in national exports and investment. “I sincerely hope that this Conference will become the ground for effective multilateral experience exchange”, — noted Mr. Mitskevich.

The first part of the Conference was opened by the Deputy Minister of Finance of the Republic of Belarus Yury Seliverstov. He introduced the audience to the structure of the State Budget for the period from January to August 2016, highlighted its execution plan and the respective measures taken. There was also brought up an issue regarding the position of the Republic of Belarus in the OECD Country Risk Classification, where the assumption regarding the possibility of its increase was put forward and backed by the following factors: the fivefold increase of GDP per capita ratio and the double rise in the Doing Business ranking (as compared to 2005).

Detailed and valuable information was also presented by the First Deputy Chairman of the Board of the National Bank of the Republic of Belarus Taras Nadolny. His presentation “Financial Market of the Republic of Belarus: Development Pathway” illustrated the institutional structure of the Belarusian financial market, the “depth” of financial sector, as well as clarified what measures had been taken in the framework of the programme of financial market development for 2011–2015.

In the course of the discussion, which was moderated by the First Deputy Director General of Eximgarant of Belarus Mikhail Olshansky, delegates were able to ask questions. The representatives of foreign ECAs were interested in the national directed lending policy. Taras Nadolny commented: “The plan to cut the volume of directed lending has been adopted. Besides, the Belarusian Development Bank has been assigned such mandate, so almost all the directed lending is carried out by this particular financial institution. By the end of 2020 we are planning to have volumes of directed lending cut in half as compared to the current record”. Foreign delegates also asked whether it was possible to regard the insurance policy of Eximgarant as a state guarantee. This statement was affirmed by Yury Seliverstov.

Exporters were speaking about the most urgent business issues. Hence, questions from enterprises could be described as highly topical and sometimes controversial. One of the questions, for instance, lied upon the matter of the actual effectiveness of concessional lending. “The answer is obvious: cost of capital is highly expensive. We also should not forget that Belarus is in the 7th risk group according to the OECD Country Risk Classification. So, at this very moment during the Conference we all have a chance to state that being in the 7th group is quite expensive for the real economy”, — replied Mr. Olshansky. “When comparing concessional products to those operating in the global market, I cannot say there is a big difference. Consequently, speaking about the internal market, I would like to mention that the concessional lending is actually concessional as for the high cost of resources”, — Mr. Seliverstov noted.

The CEO of EXIAR Alexey Tyupanov referred to the positive experience of working together with Eximgarant. The special attention was given to such jointly implemented projects as exporting motor vehicles produced by Minsk Automobile Plant to Cuba and constructing the Miory metal rolling mill in Vitebsk region.

The second part of the Conference was devoted to both national and foreign systems of export support. The presentation considering the operational background of Eximgarant was given by the Deputy Head of Export Insurance Division Andrei Sakovich, who highlighted the company’s lines of business and opportunities with respect to international cooperation. The Partner of PwC—EULER HERMES (Germany) Thomas Baum furnished the audience with the details regarding German practice of promoting exports. Being established in 1926 the ECA is now providing efficient support to SMEs, as they contribute greatly to the development of German exports. The German Federal Ministry for Economic Affairs and Energy empowered two companies — PricewaterhouseCoopers and EULER HERMES — to render export credit insurance services. “The German Government shows interest in promoting exports, as well as German enterprises are willing to employ ECA tools”, — pointed Mr. Baum.

Besides, the experience of conducting export support was shared by the President of the Berne Union Topi Vesteri (FINNEVRA, Finland), Sylvia Isepp (OeKB, Austria), Piotr Stolarczyk (KUKE, Poland), Jan Prochazka (EGAP, Czech Republic) and others. The majority of ECAs specified the fact that the rate of the national exports covered by insurance amounted to about 2%. It can be noticed that Eximgarant recorded 3,13% ratio of new business as a percentage of national exports at the year-end 2015, so that the aforementioned tendency can be stated to have global nature.

During the panel discussion delegates were offered the opportunity to give consideration to the role of ECAs in the economies of the respective countries. The importance of government in providing export and investment support was also reviewed. Thomas Baum stressed that “there are no governmental instruments that don’t play out”. In conclusion the Director General of Eximgarant Gennady Mitskevich once again emphasized the relevance of employing insurance tools while conducting export and investment operations.

The Conference was ended up with the presentation “Cooperation with ECAs — New Opportunities” given by the Head of International Cooperation Division Polina Brovka. The main focus was given to the scope of international collaboration while implementing joint projects and applying such up-market insurance mechanisms as buyer credit risk insurance, reinsurance and counter-guarantee alternative.

The Director General of Eximgarant Gennady Mitskevich in his closing remarks thanked the delegates and pointed out that “Belarusian economy is highly integrated into the global community, so it’s obviously exposed to external risks. That is why it is very important to have all the parties — exporters, governmental bodies, banks and Eximgarant — pooling their interest, as such collaborative approach shall result into further development of national exports”.

In the upper photo (left to right):

Director General of Eximgarant Gennady Mitskevich, Deputy Minister of Economy Yury Chebotar, Director of International Business Department of the Ministry of International Affairs of the Republic of Belarus Roman Sobolev, Deputy Minister of Finance Yury Seliverstov, First Deputy Chairman of the Board of the National Bank of the Republic of Belarus Taras Nadolny

In the bottom left photo:

In the bottom right photo (left to right): 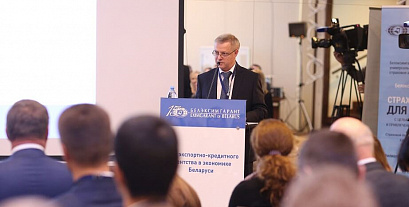 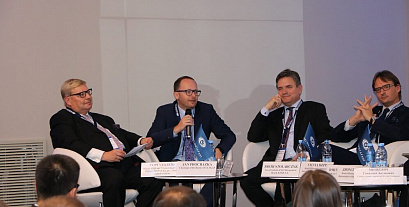