Eximgarant of Belarus — Art Patron of the Year 2015

On the 25th of January 2016 the solemn ceremony for honouring business leaders and representatives who provided support for cultural organisations during 2015 took place at the National Academic Drama Theatre named after Maxim Gorky. 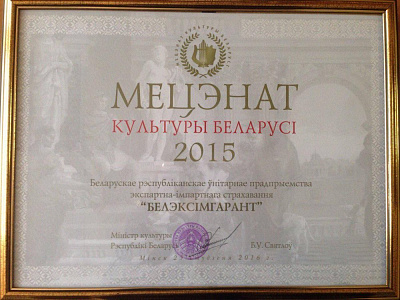 According to Boris Svetlov, the Minister of Cultural Affairs of the Republic of Belarus, the number of patrons was constantly growing. “The development of artistic culture positively affects business culture”, he said. In 2015 there was about 50 billion Belarusian rubbles received as sponsorship assistance. These money resources were used to implement a wide range of charity activities.

For the space of many years Eximgarant of Belarus has been taking part in socially significant charity projects.

There were a number of conditions taken into account while determining the nominees for the title of “Patron of Culture”, such as social importance of the project, durability of the assistance and social outcry. More than 30 companies and organisations were awarded Diplomas.