Eximgarant of Belarus and EXIMBANKA SR signed a Reinsurance Agreement

On the 2nd of October 2015 during the 12th session of the Belarusian-Slovak joint commission on trade-economic and scientific-technical cooperation was held at the Ministry of Foreign Affairs of the Republic of Belarus. During the meeting Eximgarant of Belarus and EXIMBANKA SR signed the Reinsurance Agreement. 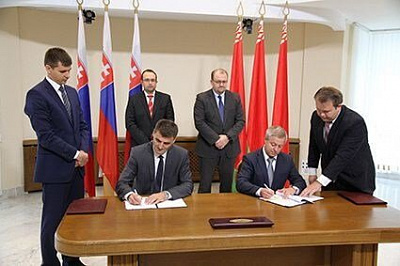 Taking into account both the opportunities for the further strengthening of the industrial cooperation of producers and the potential for collaboration between Belarusian and Slovak economic individuals, the consolidation of resources of Eximgarant of Belarus and Export-Import Bank of Slovak Republic EXIMBANKA SR can turn out to be one of the best means to increase the volume of trade between two countries.

Cooperation between Eximgarant of Belarus and EXIMBANKA SR began in December 2008 with the ratification of the Cooperation Agreement, which allowed the parts to work together in the fields of coinsurance, reinsurance, information exchange, assistance in the implementation of the right of claim (subrogation) and in many other areas. The Reinsurance Agreement signed on the 2nd of October 2015 is the next stage of collaboration between Belarusian and Slovak export credit agencies.

The Reinsurance Agreement covers the development of bilateral cooperation in two main areas. First one is an insurance support of export-oriented joint ventures. As the Agreement was signed, Eximgarant of Belarus is capable to insure export risks of Belarusian-Slovak joint ventures in the third parties’ markets delegating a part of its responsibilities to EXIMBANKA SR. The mechanism described above will also be applied in Slovak Republic. The second cooperation area is reinsurance of risks of Slovak export projects carried in Belarus provided by Eximgarant of Belarus.

Yet, the ratification of the Agreement covers 4 important points:

The purpose of the cooperation established within the Agreement is not only to achieve quantity results, but to improve the quality of the services. In particular, the integration between two companies will increase the quality of project management services as there will be more reliable information about clients provided, so the information exchange and analysis will be more accurate.