Berne Union and Prague Club members globally boosting cross-border trade and investments. Their Spring Meeting was held in Florence, Italy in May 2015.

For the first time since 2008, BANCOMEXT, the official Export Credit Agency of Mexico, joined the Meetings representing the second largest economy in Latin America. Indonesia Eximbank participated in their first meeting as a new Prague Club member.

Following the first joint Annual General Meeting in London last October, the Florence Spring Meetings have further reinforced the progression of the Berne Union as a global player.

This process was driven by increasing awareness of private and public export credit and investment insurers on the growing role played by their industry over the past years, particularly in the aftermath of global financial crisis. As shown by trends and figures analyzed in Florence, the volumes of new business generated by Berne Union and Prague Club Members have grown steadily and progressively since 2009, reaching the value of nearly 2 trillion of dollars in 2014 — a great boost to cross-border trade and investments.

“Notwithstanding the diversity of membership there are topics that unite us across geographies, size, and culture” — said Dan Riordan, President of the Berne Union and Chief Executive Officer of Zurich Global Corporate in North America — “Stakeholder management, be it guardian authorities or shareholders, is one such topic and brought about one of the highlights of this year’s Spring Meeting. The takeaway was clear; these relationships are crucial to the success of any entity and will weigh heavily on the future success of credit and investment insurers. Such proactive interactions and strong communication will enable Berne Union and Prague Club members to continue to demonstrate value to their customers and, also to promote the importance of accessible channels to global trade in developed and emerging markets alike”.

“We were honored to host such a global event here in Italy — declared Alessandro Castellano, SACE CEO -. In many countries as well as ours, the need to foster growth in a highly volatile and risky environment gave prominence to the anti-cyclical role of all Berne Union and Prague Club Members. I believe these Spring Meetings offered a wonderful opportunity to celebrate our success story in a symbolic place like Florence with a centuries-old tradition in trade and finance”. 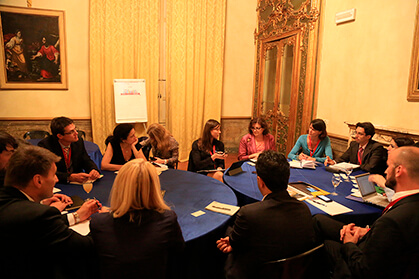 Both investment insurance and short term credit insurance have shown a progressive increase in new business in the past six years, driven respectively by growing political risk and instability in key geographies and by growing credit and insolvency risk; medium and long-term export credit insurance remained almost stable, continuing to represent a fundamental prerequisite for doing business in most emerging and developing countries.

The Berne Union and Prague Club Delegates took part in a social initiative in a coordinated activity with UNICEF‘s “Pigotta’s Project”. Launched 15 years ago in a small Italian town, the project uses people’s creativity to sew up and decorate rag dolls (“pigotta” is an endearing Milanese name for these dolls) in order to raise funds for UNICEF as well as sensitize volunteers about less fortunate children living in other countries. Delegates successfully contributed to the creation of 50 pigottas to be given back to UNICEF and made ready for “re-adoption” to fund the immunization campaign against the six deadly childhood diseases.