Eximgarant of Belarus — the official partner of the international conference “Belarus: Trade Finance ‘2015’”

From 18th to 19th of March 2015 an international conference under the auspices of the EBRD “Belarus: Trade Finance’2015” was held in Minsk at the Crown Plaza Hotel. 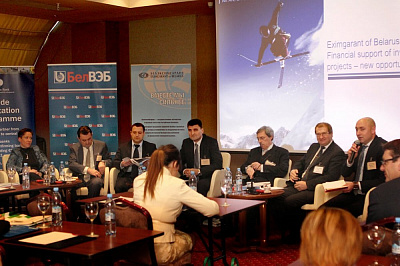 The event enlisted more than 100 participants, among who were representatives of the banking and corporate sectors, ministries and agencies, the Western investment community. The participants discussed opportunities and strategies for cooperation in the field of trade finance.

First session was opened by Taras Nadolny, First Deputy Chairman of the National Bank, with the report “Banking system of the Republic of Belarus. New challenges”. Mr. Nadolny had submitted a substantive report on the current state of the Belarusian economy, the main risks, the forecasts of the development of the macroeconomic situation and the target solutions to potential issues and problems. Particular attention was focused on the matter of external debt. First Deputy Chairman of the National Bank assured the participants about the adequacy of the types and sources of its repayment.

Also the speaker elaborated on the key priorities of the state’s foreign policy. In particular, Mr. Nadolny stated the guidelines for adaptation of the national system of export promotion and development for current and potential threats using opportunities in the framework of the Union State, MERCOSUR, ASEAN, NAFTA and other integration associations to enhance and ensure a balanced regional pattern of exports, the expansion and deepening of cooperation in trade and economy within Eurasian Economic Union, the improvement of the public regulation of foreign economic activity taking into account the legal framework of the EEU, further improvement of the customs administration scheme in order to facilitate export activities, to reduce the transaction costs, to increase the transit potential of the country, to boost export of services and to implement the innovative strategy of exports development by means of increased volumes of exporting high-tech products and technologies.

An individual part of the report was dedicated to the banking system of the Republic of Belarus with an emphasis on its stability and strict adherence to the international standards both of the prudential regulation and the security.

The second half of the conference day was devoted to the participation of export credit agencies in project finance in the Republic of Belarus. Michael Olshansky, First Deputy General Director of Eximgarant of Belarus, opened up the second section with the report “New opportunities of financial support of investment projects”, where he concentrated the main directions of cooperation with foreign export credit agencies on the export promotion in the framework of implementation of joint projects and support of raising investment volume.

Mr. Olshansky put an increased focus on the risks related to the implementation of investment projects on the territory of the Republic of Belarus, on the primary risk insurance of foreign banks activities and on the cooperation with foreign export credit agencies in the field of co- and reinsurance.

Michael Olshansky emphasized the benefits of collaboration at all the stages of project implementation such as underwriting, insurance and losses settlement.

In conclusion, Mr. Olshansky resumed that an export credit agency, as an institutional superstructure of the real sector of economy, must create the necessary financial infrastructure primarily in view of business interests, and Eximgarant of Belarus welcomes the possibility of cooperation with reputable banks and export credit agencies and is ready to consider all collaborational proposals to support bilateral trade and capital flows. As the insurance coverage of Eximgarant of Belarus corresponds to a high level of reliability due to some objective factors it allows attracting investments in the country without the involvement of the government guarantees or any additional burden of the budget.

At the end of the presentation there was the plenary discussion held with representatives from leading export credit agencies: EULER HERMES (Germany), SACE (Italy), OeKB (Austria), EGAP (Czech Republic), FINNVERA (Finland), EKF (Denmark), EKN (Sweden), SINOSURE (China), KUKE (Poland), EXIMBANKA SR (Slovakia), SID BANK (Slovenia). During the discussion the participants answered questions about the applicable underwriting policy, the limits on transactions in Belarus and the working experience in the region. The experts confirmed by common consent the positive experience of goods trade transactions insurance in the Republic of Belarus.

The second day of the conference under the motto “Export credit agency in Minsk” was devoted to the review of the policy of ECA in relation to the current risks in the CIS. During plenary discussions the participants, including the representative of Eximgarant of Belarus Michael Olshansky, talked over such issues as the increasing tensions in the region, sanctions, associated risks and management options.

The program of the second day also included presentations made by Vincent O’Brown, Member of Banking Committee of International Chamber of Commerce, on the topic “Assessment of activities in the field of trade finance in 2014 and plans for 2015”, where the speaker focused on the reflection of the role of the CIS in global trade finance, and by Rudolf Putze, Deputy Director of Financial Institutions and Head of the EBRD’s Trade Finance Facilitation Programme, on the topic “The EBRD’s Trade Finance Facilitation Programme — Analysis of the achievements of 2014th and plans for 2015th” that illuminated the CIS’s strategies of trade financing in the uncertainty period as well as its role in global and regional trade finance.

The conference ended with a solemn ceremony of presenting certificates EBRD TFP e-Learning Programme 2014/2015 and awarding its best students.