Eximgarant of Belarus and CESCE (Spain) signed Memorandum of Understanding

Belarusian delegation led by Minister of Economy Mr. Nikolai Snopkov was on a working visit to Spain on 11–14 June. 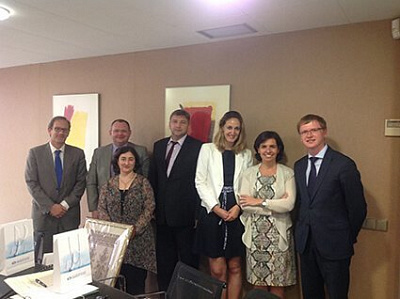 The delegation comprises the Belarusian Ambassador to France and Spain Pavel Latushko, Deputy Finance Minister Maksim Yermolovich, representatives of the Economy Ministry, the Development Bank of the Republic of Belarus, Eximgarant of Belarus, the legal firm Sysuyev, Bondar and Khraputsky. The delegation took part in the presentations of the opportunities in the trade, economic and investment cooperation between Belarus and Spain. The presentations were held in Madrid and Barcelona on 11–13 June. The events of the kind were held in Spain for the first time.

Nikolai Snopkov and members of the Belarusian delegation also held meetings with representatives of the Ministry of Foreign Affairs and the Economy Ministry of Spain, the Spanish export credit agency and leading banks of Spain.

During the visit Eximgarant of Belarus held bilateral negotiations with the Spanish export insurance Agency CESCE — member of the International Union of Credit and Investment Insurers (Berne Union) as well as signed Memorandum of Understanding.