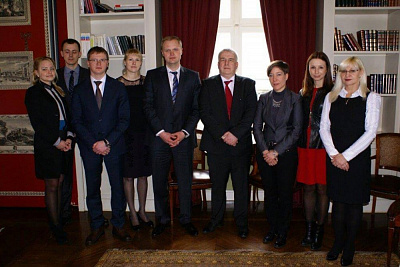 On behalf of Eximgarant of Belarus the document signed Deputy General manager Mr. Oleg Pavlovsky, on behalf of KUKE S.A. Chairman of the Management Board Mr. Dariusz Poniewierka.

The agreement will allow companies to assist each other in providing reinsurance coverage for the Belarusian and Polish export projects.

Apart fr om that, During the visit, delegation of Eximgarant of Belarus held the meetings with Deputy Chairman of the Board of the Bank of National Economy", wh ere Eximgarant of Belarus declared that it was ready to provide insurance cover against risks related to the implementation of investment programs in the territory of the Republic of Belarus involving Polish capital subject to the insurance cover by KUKE. The introductory meetings were also held at the Ministry of Economy of Poland and Polish Agency for Foreign Investment.