Eximgarant of Belarus and Ukreximbank made an agreement on export insurance 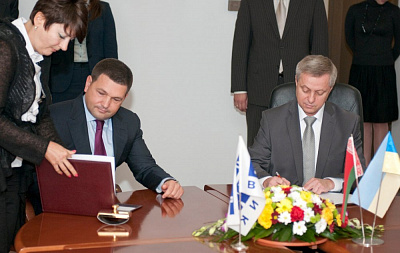 The Agreement provides for cooperation of state financial enterprises of Ukraine and Belarus in export loans and investments insurance.

The main objective of cooperation is expansion of commodity turnover between the countries and implementation of investment projects.

“Ukreximbank appreciates start of cooperation with Eximgarant of Belarus”, noted Vitaliy Belous, the Chairman of the Board of Joint-Stock Company Ukreximbank. “Signing of general agreement between our companies is logical continuation of those close relations that have formed between two countries in their economies and investments.”

“Mission of Ukreximbank and Eximgarant of Belarus is to develop commodity turnover between Belarus and Ukraine and businessmen from our countries are interested in it”, noted Gennadiy Mitskevich, the director general of Eximgarant of Belarus. “The instruments that our financial institutions possess will complement each other and we are ready to exchange our experience within export insurance and export crediting to strengthen economic ties. Therefore we hope for close cooperation with Ukreximbank, one of the largest and most reputable banks of Ukraine, on an on-going basis in implementation of certain programs.”

Public Joint-Stock Company State Export-Import Bank of Ukraine is universal credit and financial institution with 100% state capital. It is one of the largest systemic banks of Ukraine and has the most branched network of correspondent banks.

Picture: Vitaliy Belous, the Chairman of the Board of Joint-Stock Company Ukreximbank (on the left), and Gennadiy Mitskevich, the director general of Eximgarant of Belarus (on the right), are signing the Agreement.