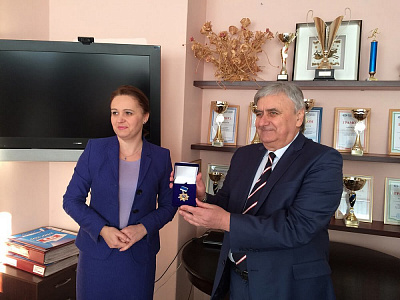 The decision about the appropriate candidate to award was made at the General meeting of the members of the Association in December 2015. The selection criteria were significant contribution to both improvement and development of the insurance industry, consolidation and development of the international cooperation between Belarusian insurers on one side and international insurance markets and professional associations on the other.

Vyacheslav D. Bolibok has made a great personal contribution to the elaboration of the national system of export promotion operating on the basis of credit mechanisms and the combination of export insurance and state support based on the principles and conditions that fully comply with international standards. A year after the establishment of Eximgarant of Belarus, in 2002, it entered the Prague Club of the International Union of Credit and Investment Insurers.

On the photo: Irina Merzlyakova presents the award to Vyacheslav Bolibok.